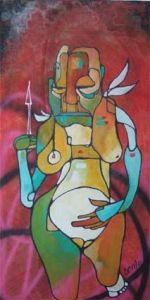 The uterus is a pear-shaped muscular organ primarily designed for childbearing. A baby is carried and nourished in the uterus as it grows from a tiny collection of cells to a full-term foetus ready to emerge into the world as a healthy newborn. In its non-pregnant state, a typical uterus is approximately 2.5″-3.5″ long and 1.5″ at its widest point. To accommodate a growing baby, the uterus is capable of enormous expansion. During pregnancy, its weight increases from about 3 ounces to 20 pounds (incl. the baby) and its capacity increases more than 4000 times. A truly amazing part of every woman’s body. As special as this organ is, it can also be a pain – literally – uterine muscles contract, during menstruation, labour and orgasm (that’s the nice one!).

The uterus is suspended in the pelvic cavity by various ligaments, though its position varies from woman to woman. In most women, the uterus is anterior (facing forward) and rests close to the bladder when a woman is standing. However, there is an increasing number of women with a uterus that  faces backwards. A uterus in this position is also referred to as retroverted, tilted or tipped. Most women with a retroverted uterus don’t experience any symptoms, but for some it causes problems including pain during intercourse or during their periods. A misaligned uterus can be the result of posture, accidents or trauma.

Subtle changes happen to all of us as we grow and the relationship between our bones and muscles becomes fixed in the way that gives us each our individual posture. Often, we become set in slightly imperfect ways. For example, over-contracted muscles in the lower back can cause the hips to rotate slightly. This in turn can cause the uterus to tilt left or right, towards the back or more towards the front. Quite often, injuries cause us to protect a painful area leading to a permanent change in the way we hold our bones and muscles. Also, a childhood accident, even something as simple as falling off a wall, may cause unnoticed scar tissue to form in the pelvic area, restricting the movement of muscles and ligaments that link the back and front of the pelvis and the organs it contains.

The organs of the pelvic cavity, the uterus, the bladder, and the rectum, all fold against each other, so that the wrong positioning of one can easily affect the others, and the blood supply, nerves and lymphatic tissues that link and surround them. This leads to what is commonly called “congestion in the pelvis”.

In addition, if the sacrum (the base of the spine) is badly aligned, the important nerves that leave it, including those that enter the uterus, can be compromised. What’s the normal position for a uterus? You can find out here.